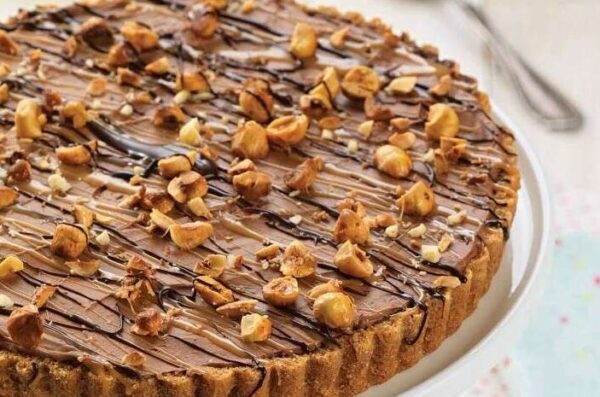 What you will recieve:

To serve: Transfer the tart from the freezer to the refrigerator 30 minutes before you want to serve it, to soften. Drizzle with caramel sauce, sprinkle with nuts, cut, and serve.

To make the garnish:

Smear the butter into a 12″ square on a cookie sheet. Spread nuts atop the butter, then sprinkle with a pinch of salt. Bake in a preheated 300°F oven for 8 to 10 minutes, stirring every couple of minutes. Remove the nuts from the pan and cool to room temperature. Sprinkle with additional salt, if desired.

What you will need:

Tarts are typically free-standing with firm pastry base consisting of dough, itself made of flour, thick filling, and perpendicular sides while pies may have softer pastry, looser filling, and sloped sides, necessitating service from the pie plate.

The main difference is that pies have an upper crust while tarts don’t. While pies have a thin and smooth crust, tarts have a rather thick and crumbly crust which crumbles down when pieces are cut from the tart. Pies are served in the same dish they are made in, while tarts are often taken out and molded, if needed.

A small, baked pastry that is round in shape with a shallow wall around the entire base. Typically a Tart is made with a pastry dough that is light and flaky or a short crust that is dense and crumbly. It is made to be served as an open crust containing sweet fillings such as fruits, custards, or creams, as well as savory fillings that are most often served warm. Each Tart is made to be filled and kept open without a top crust. Similar in meaning, a pie, a flan, a quiche, a tartlet, a tarte, or a tartelette all have an appearance and structure that is basically the same as a Tart. A Tartlet, which may at times be used in reference to a Tart, is a term that applies to a smaller-sized Tart. The Tartlet may be a single, bite-sized version of a larger Tart such as an appetizer, or it may be a pastry larger than a bite size piece that is made as an individual dessert serving. When the Tart is made as a large pie-like food it then is prepared so numerous individual servings can be sliced from the whole Tart. Tart delivery service in Johannesburg.

There are no reviews yet.

Only logged in customers who have purchased this product may leave a review.